From earliest childhood, upon graduating from the front seat in our family stroller, I let go of my mother’s hand. Walking along downtown, I ran ahead, my mother’s cries of “Slow down!” faintly detectable, yet unheeded. This is not to suggest that I was particularly agile. My

tendency to forge ahead frequently ended in crashing and burning—tripping up stairs, wiping out on my bike, sprained ankles, and roughed up elbows and knees. Fast forward to my adult life, when on my first date with my eventual husband, he remarked, “You’re a fast walker and I’m a slow walker; we’ll never get along.” Undeterred, and despite my blunderbuss tendencies, we have survived several decades of marriage.

As summers go, this past one ranked with the more idyllic I’ve experienced: warm but not hot, dry but not parched, still but not airless. The gardens in our valley overflowed with blossoms, and herbal scents drifted over our outdoor dinners under starlit skies. Guests and family roamed in and out throughout June and July, until one busy morning, dashing from the house 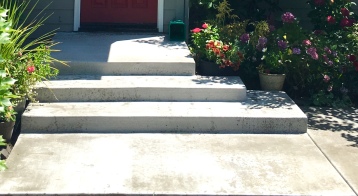 to the car (ahead of my husband, naturally), I lit on our recently reconfigured entry steps. My left ankle gave way, and I went down hard, crying out. I can still see in my mind’s eye my printed wrap skirt askew, ill-considered short tapered heels scuffed, now appearing daft as I sat back and looked at what damage my haste had wrought: a grossly malformed ankle, left foot folded under and jutting right. I called for ice, and my husband called 911. Our visiting family members emerged aghast on the front stoop, to hold me and to cover me, as I was going into shock. This was no minor mishap.

Within 30 minutes, I had been wheeled into an emergency room stall. By three hours post-tumble, I was led out atop a wheelchair and in a temporary cast. My pronounced diagnosis: a trimalleolar fracture (translation: three bones broken) requiring surgery within the coming week. As soon as I was back home, lifted up the treacherous front steps and resettled on the couch, my husband ran out seeking grab bars for the bathroom and setting in action all that needed care in our home, our property, and ourselves. I alternated dozing and wakefulness as from a nightmare. By morning, I undertook my first lesson in bird-bathing from a warm water pot. By the end of the week I braved lowering myself into the tub, left foot upraised to keep it dry.

Surgery day dawned and with it my resolve: whatever is to be, we’ll soon know. Let’s get it done. The surgical repair included piecing my lower leg and ankle together with a bracket and six screws on the left, two more longer screws on the right. Keep it dry. Alternate oxycodone (an opiod?!) and Tylenol for pain. Rest. Wiggle your toes. DO NOT put any pressure on the left leg.

Shell-shocked, and knowing I was now dependent on him for every detail of my life, my husband took to frenzied cleaning, mowing, and stockpiling groceries. My two daughters had swept in filling vases with flowers, plumping pillows, and perching alongside me to chat. The house felt fresh and fragrant as I drifted in and out of consciousness. Spectacular plates of food miraculously appeared; dinner occurred al fresco. I had become a useless object of attention and obligation. I had no urge to help in any way. My greatest effort was to smile and express gratitude at every turn.

For two weeks nothing seemed to change. I must acclimate myself

to immobility so as to stabilize the repair sufficiently to take on a rigid knee-high boot. This would be removed for bathing or icing only, zero pressure still. I hobbled one-footed on crutches, perpetually unsteady. Within days I was desperate to find alternative means of mobility. I ordered a sturdy metallic blue knee scooter that allowed me to zip around on the main floor. Our second-story and sunken family room (thus, the TV) remained inaccessible. Never a television enthusiast, I felt suddenly bereft, cut off from the evening news and the diversion of Netflix.

Throughout the next six weeks, friends popped in with meals and highly touted books. Their visits and updates refreshed my mental scope. Otherwise days consisted of the ordeal of bathing and dressing, scooting around the kitchen to make coffee, hobbling out onto the deck, reading the news, icing and dutifully rotating my ankles (sans boot). My stack of completed books climbed on the bedroom desk. I stared out the same windows for hours on end.

Eventually my desire to move overcame trepidation. I ventured to make my own lunch and carry it out back. I negotiated the two steps down from the deck to the lawn and into the garden. Expanding my horizons by baby steps, I risked leaning in over the flower border to smell apricot roses nodding among lavender, hydrangeas and quieter perennials. I reached what seemed a historic milestone when I walked a full ninety paces on crutches to pick up

the mail from the lockbox three doors down. I worked out a series of maneuvers that would get me into and out of the car, tossing crutches into the back seat. My husband invented a multitude of welcome diversions. Gin rummy games. A drive to Barnes and Noble to pick out a promising new read. An escape from the city limits onto a country road to a local farm to gather fresh blueberries, greens, peaches, and tomatoes. To my recently restricted perspectives, these rides acquired the shine of exotic adventures.

As I progressed with the orthopedic boot, I now could drive! I scoured local boutiques for flared pants that would slip on and for wider, half-size larger shoes and boots to accommodate my grotesquely swollen foot and ankle. I acquired five pairs of knee-high compression socks to help push out the persistent fluid pooling from my toes to mid-calf. Months earlier, we had booked several cross-country flights, including a major family gathering in early October, just as I was emerging from my ortho-prison. For me, there remained significant hurdles. We  strategized ways we might beg the indulgence of other people’s forbearance. My husband packed along my ankle x-ray to show the agents when we arrived at each airport gate. This secured pre-boarding for each flight, though the ache of immobility once aboard had simply to be borne.

Fortunately physical therapy had been prescribed as part of my rehabilitation. The refreshment and encouragement of exercise! Steadily plodding, obedient to my physical therapist, I built up my fully atrophied left calf muscle. He reminds me repeatedly that 100 years ago, I would have been lame for life. I wince every time he says it. I know I will do whatever it takes to walk again. Now eager and driven, I relearn how to point my toes, to squat, and to walk backwards.

A friend had three years earlier experienced the same sort of fracture much more heroically: by falling down a mountain rather than off a five-inch step. She

told me the key to her recovery was going to the pool every day for an hour and essentially just treading water. Having been an avid swimmer in my first twenty-five years, the prospect of recovering that habit was beyond tantalizing. I found I could hit up a lap swim/aquatic exercise session twice a week for $5.60 and dove in with a vengeance.

Now that six months of recovery have passed, I can walk without a trace of a limp. I’m still working on left ankle strength. I cannot walk on tiptoe. My balance is marginal. Time passes while I persist. I go to the fitness center for weights and treadmill two to three times a week. Two days a week I swim. After the first three weeks of steady exercise, things fit better. Another two weeks along, life fits better. I want no longer to charge ahead like the proverbial bull in a china shop. The manic drive with which I had formerly greeted my days has yielded to equanimity. I step to a slower, steadier pace. I recall a day now months ago, as I sat inanimate and blank, my husband admitted having thought, a split second before my fatal fall, “She’s going too fast.” That was me, and that was then. Today I take care that we walk in tandem.

I find that to rebuild from jarring circumstances, I prioritize what I value. The dreaded unknown forced me to examine untouched tools yet available in my toolkit of life, to abandon resistance to alternative ways of being. It is only through previously untrod paths that I recover a long-lost self.